The iconic Kangaroo Paw with its vivacious, bright and almost iridescent flower shines through the native foliage. It is a lively presence here where much else is muted.

The Kangaroo Paw calls Western Australia home and is endemic to this region. Find it growing wild along roadsides, in eucalypt forests, along river banks, around swamps and shallow waters…nearly anywhere it can take root. Since it requires well-drained soils and plenty of sunlight, that is nearly everywhere in this arid and sunny state.

Different species flower in different months from July to December. And, it is responsible for creating a colourful and pleasing display along with other bright and cheery wildflowers that add their own signature hues to the scheme.

Its remarkable features – the velvety stem and flower, the vibrant colours and the unusual paw-like flower head – make it popular and highly desired in gardens across the world. And, it is an export favourite being frequently shipped to the USA, Japan and Israel.

The unique red-green flowers are alluring. But a stunning palette of pink, yellow, orange and green is also available. And, Kangaroo Paw is perfect for both fresh and dried flower arrangements.

It stands as a testament to our dynamic yet delicate environment. Perhaps this is why it is chosen as a floral emblem for our state of Western Australia, and it even appears on many stamp issues.

This isn’t nearly enough. There is more to this amazing native flower.

Did you know that there are 11 species and 13 recognised sub-species of Kangaroo Paw, with one species holding a genus all to itself? Did you know that Kangaroo Paw is pollinated by birds and can encourage native bird activity in your garden? Or, how about the fact that this dazzling, beautiful flower is resilient, strong and hardy beyond imagination.

Read on as we rediscover a gem and discuss its fascinating aspects.

A bit of history

Jacques-Julien Houtou de La Billardière, naturalist and botanist, was responsible for first describing Kangaroo Paw in 1792. He made the observation when the ship he was aboard, “d’Entrecasteaux’s ship Espérance”, made a stop for repairs in Esperance during its expedition to Australia. 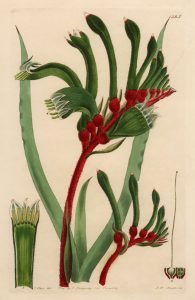 His collections contained more than 4000 plants, of which three-quarters were previously unknown. And, valuable descriptions of the lands and peoples that the expedition visited, including detailed accounts of the ways of the Aboriginal peoples.

The Kangaroo Paw blooms are fan-like clusters attached to long stems. Each flower has a bright red ovary and unusual paw-shaped petals. Seeing this he named it Anigozanthos rufus.

Anigozanthos – from the Greek anises, meaning unequal, and anthos, meaning flower, referring to the unequal perianth lobes of the flower. An allusion to the division of the flower into six unequal parts.

Other than the Red and Green Kangaroo Paw a few other species are common.  These include the Green Kangaroo Paw, which comes in a range of colours – from lemon yellow to emerald green, and Catspaw, which has smaller brightly coloured flowers.

The Aboriginal people call Kangaroo Paw Nollamara or Kurulbrang or Yonga Marra in the local Nyoongar language. They use it in preparing traditional medicine and the plant is of considerable significance to them.

Here are other incredible facts: 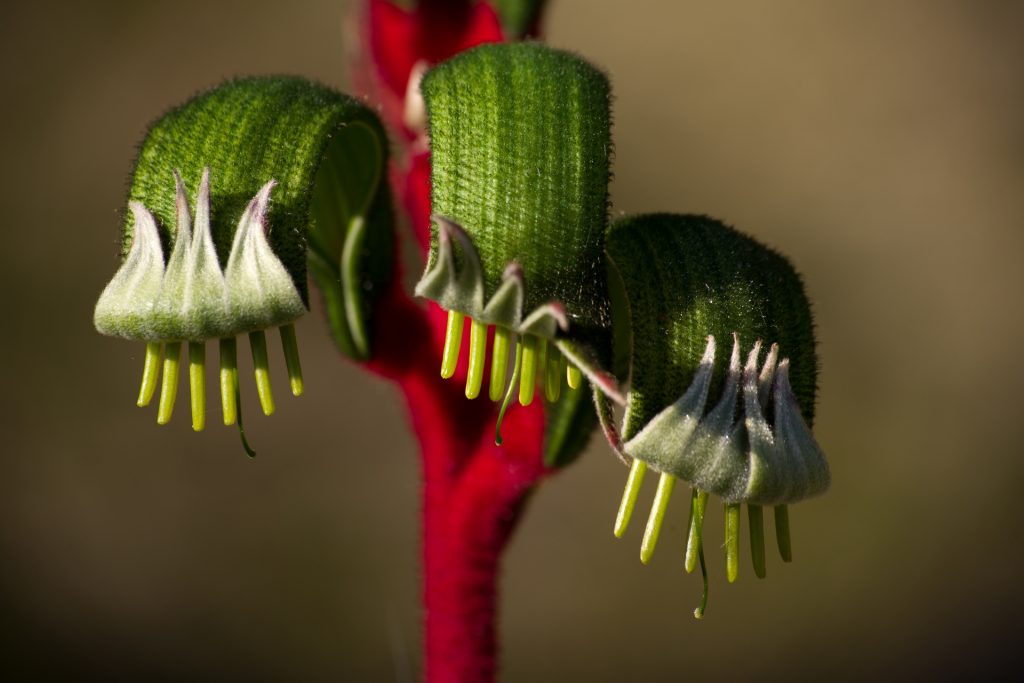 Kangaroo Paws at The Wetlands Centre

If you are considering planting a native garden, Kangaroo Paw is indispensable. You can start by planting at least a few varieties in your garden for that dazzling effect.

If you come down and take a stroll in the perimeter of Bibra Lake or North Lake you will find the familiar sight that is the Red and Green Kangaroo Paw. You will find them blossoming in our waterwise garden too. They thrive rather well in their natural environ here. And our team of staff and volunteers do a great job of caring for the native plant life in and around this area.

To learn more about our amazing native plants and animals, and to help us make sustained and continued efforts towards conserving and rehabilitating our wetlands, come join us at The Wetlands Centre.

We look forward to seeing you there!